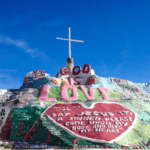 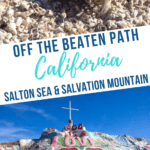 Palm Springs is known for its Desert Resorts, Coachella, and Sonny Bono. Hollywood stars and socialites from Los Angeles travel two hours to soak in the desert sun and splash in hotel pool parties.

That is where the Salton Sea Ghost Town and Salvation Mountain comes into play.

Salvation Mountain is a must-see that is off the beaten path from Palm Springs. Make sure to see this treasure before it disappears!

During a six-day trip to Palm Springs, I had a trick up my sleeve and didn’t tell the family much about it. We were going to take a road trip one our out of Palm Springs to the Salton Sea.

This road trip was education and inspiring all at the same time. The Salton Sea is the world’s largest inland seas measuring at 45 miles long and 25 miles wide and 227 feet below sea level.

This extremely salty sea is a hard place to live, and hundreds of Tilapia die each year as the sea continues to evaporate.

This Sea has a strange history. The Sea was created by accident due to the valley flooding from a canal that diverted water from the Colorado River.

Once the Sea was full, fish were introduced to the lake, and it became a booming tourist attraction for the rich and famous. Hundreds of people flocked to the sea in the desert.

A Yacht club was built, and many people bought plots of land to retire by the Sea.

Since the Salton Sea was an inland sea with no outlet, each year the salinity level rose. Runoff from the farmland filled the lake with pesticides and residues from fertilizers. 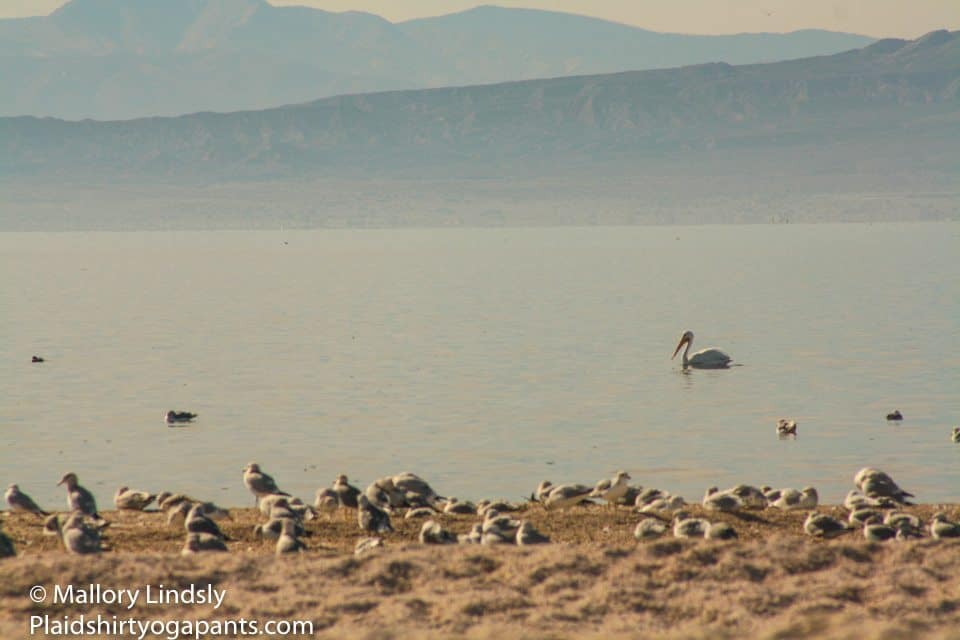 Many birds use the Salton Sea as one last water and food resource while migrating.

In 1960 the state of California feared the worse – the Salton Sea was dying.

In 1986 California announced that no one should eat the fish caught in the Salton Sea due to the toxicity levels. Due to the high saline levels, an agile bloom spread amongst the sea which caused an awful smell of rotten eggs.

The resorts and the Sea became a less desirable place to visit.

Sonny Bono was one of the actors that tried reviving the Salton Sea to its glory days. He has a National Wildlife Refuge complex built in his name because he knew the Sea plays a significant role in the great bird migration each year. 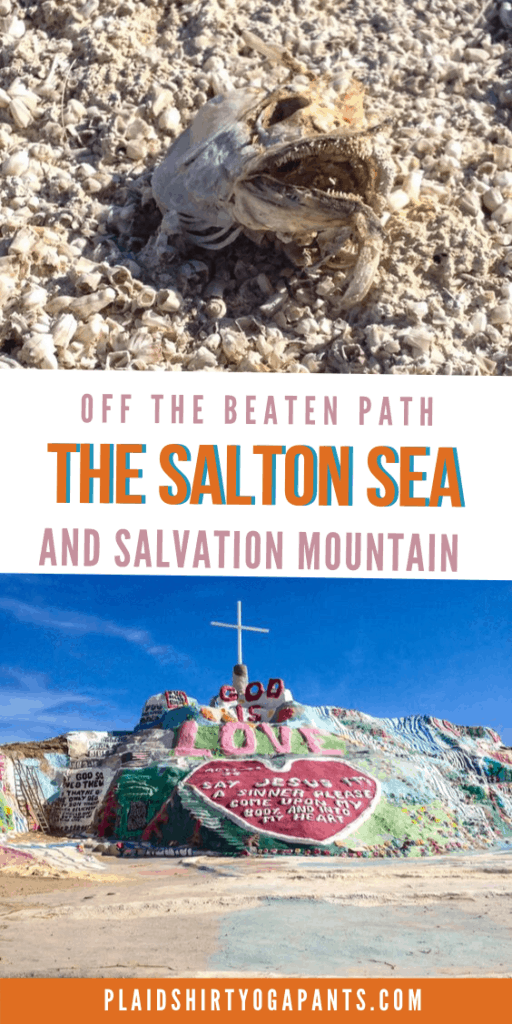 Salton Sea Things To Do

After learning about the Salton Sea and Bombay Beach, I just had to see it for myself. I had no idea that a country like America could have an ecological disaster and community so financially weak that it is sickening.

I didn’t tell the family anything except for the fact that we had to pack a picnic lunch and that we were going to go somewhere off the beaten path.

The mountain is 50 foot high and 150 wide made of adobe clay and donated non-toxic paint.

Knight died in 2014, but volunteers continue to patch and paint the mountain to spread God’s message.

Seeing Salvation Mountain in person was worth the drive, especially since it may become a disappearing landmark in the future! 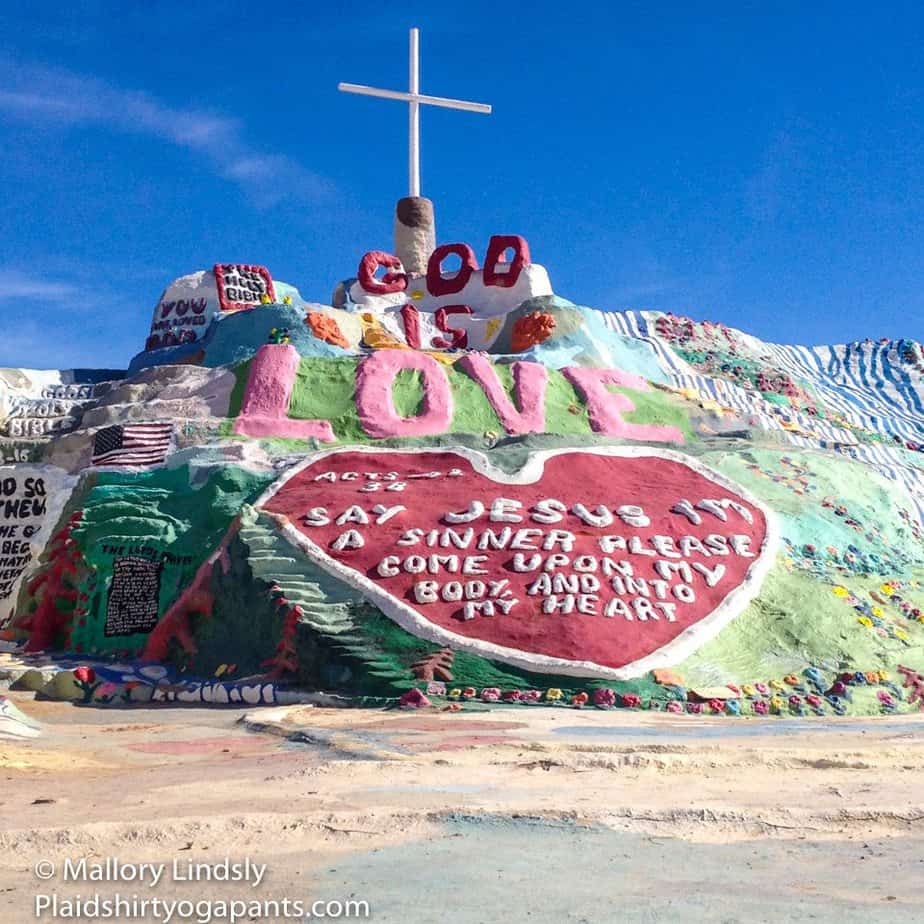 Salvation Mountain was created as a way to bring tourists to the Salton Sea.

Salvation Mountain in Niland, California is located on the east shore of the Salton Sea and is surrounded by massive mud levees. It also marks the southern end of the San Andreas fault.

Many of the residents we ran into got around the small neighborhood on golf carts because the nearest gas station was 20 miles away.

Bombay Beach reminded me of a post-apocalypse Katrina. This 300 person ghost town continues to battle with the desert elements and flooding from the sea.

Driving around this small town made me feel like I was violating the resident’s privacy, but everyone we met was friendly. 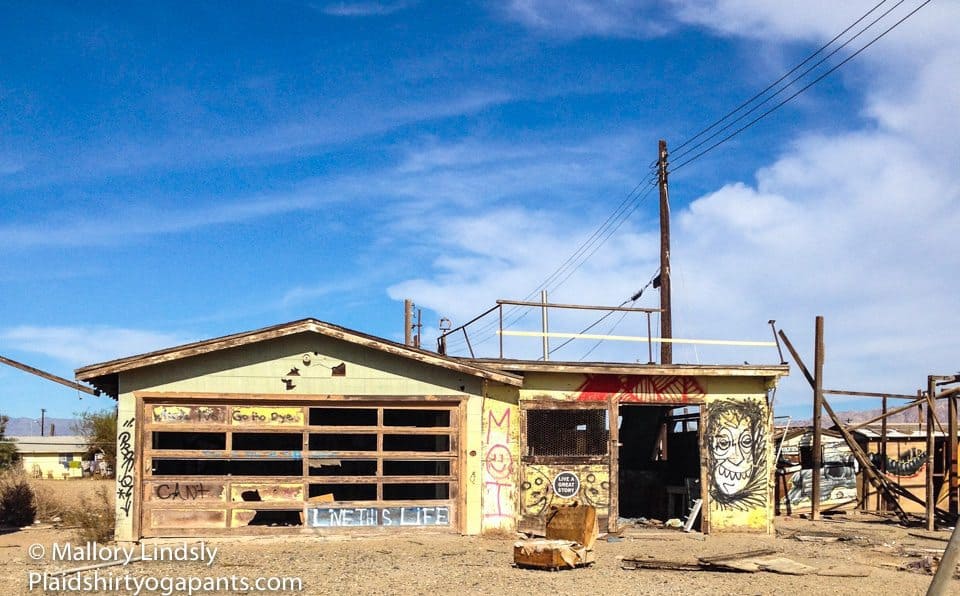 Many houses are destroyed but it is hard to figure out which houses still have residents.

Our final stop on this bizarre road trip was to the

Gross, I know. But I just had to see it! Mom and I stepped onto the beach to investigate, and when I came across my first fish head, I squealed.

How is this beach made up of dead fish carcasses?

We visited in the winter and were able to see a lot of birds enjoying the salty water and fish left in the Sea. 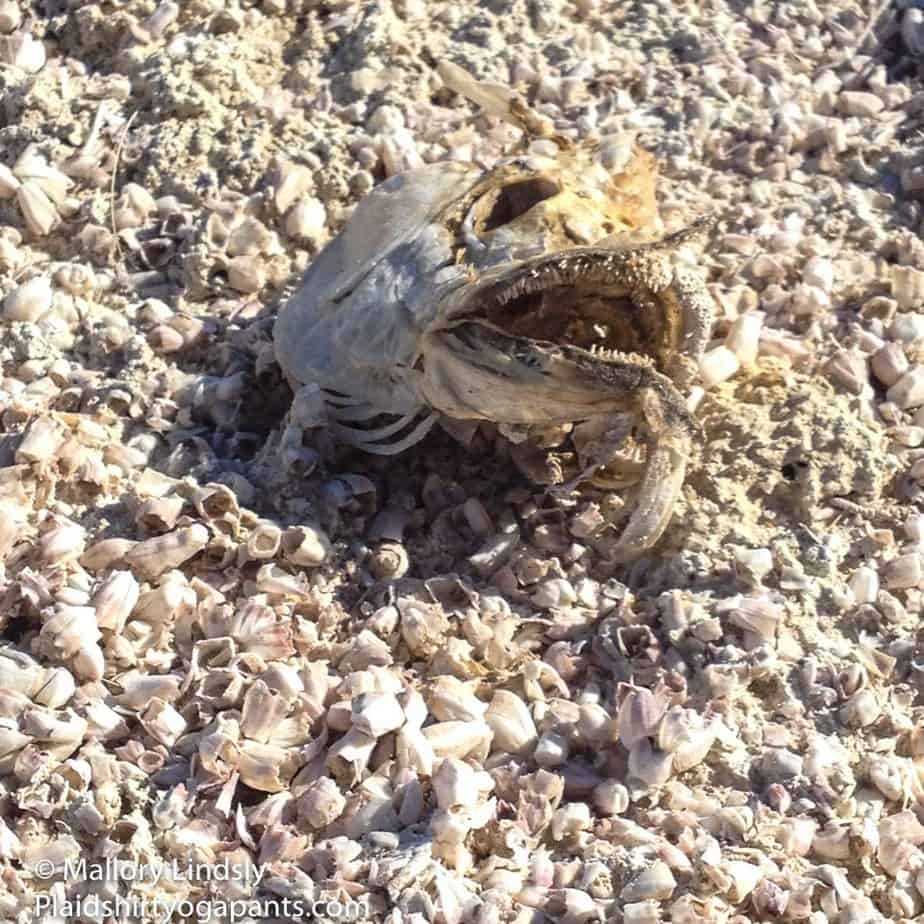 The beach is made up of tilapia bones and barnacles.

Absolutely! The Salton Sea is enormous, and we didn’t even get to visit all of the towns and shores of the Sea. There is also an area close to the Sea that has bubbling mud pots that we were not able to view.

wow that is not something i have ever experienced or even heard of! Very interesting from a science point of view. can you go in the water?

People do go boating in it but I wouldn’t! I was a little freaked out about how deep my foot went into the bone sand!

Lyn (aka) The Travelling Lindfields

We have been to Palm Springs a couple of times but I don't think I have ever heard of the Salton Sea. It sounds like just the sort of off-the-beaten-path destination we would love.

You should do a road trip next time you visit! It’s quite bizarre and interesting. I loved salvation mountain.

whoa, totally creepy and awesome at the same time. First I love that the locals are still caring for Mr. Knights tribute. I hope that legacy lives on for a very long time. As for the Salton Sea town, I had read some about it but never saw the pics ever. Like a creepy ghost town that people still live in occasionally. As for the beach of bones, I would do it and would be fine with the crunch but what about the stench? that would have grossed me out after a while smelling rotting fish

The smell is real bad! It was actually worse by Bombay Beach than the State Park. I guess it has to do with the winds because they said if the entire sea ever drains it will smell from there all they way to LA

thank you for introducing this place! looks very cool!

Your welcome! Let me know if you ever visit and what you think!

If you could stand the smell! We did catch the sunset in Joshua Tree and you can see the sea from that view point. It looks so beautiful in the distance.